After You had Your second or third bicycle stolen from Your hands, You might arrive to the point to look for a used bike next time, instead of buying yet another new expensive bike that will be highly endangered to be stolen again quick.

A conclusion that many of the sorrow-stricken victims of bike theft have also arrived at and that`s why it has become quite a task sometimes to find a good legal bike on the used bike market in Berlin.

Great demand leads to higher prices and often exceeds the value of the defect bikes at public auctions or ebay and other lists.

On the commercial side rising prices are influenced by the rising costs of a shop, rent, energy and the cost for full time employees. Some bike markets are taking high provisions.

The alternative is to buy a used bike from a private seller, not always legally safe or technically checked but probably good for an odyssee through the beautiful city of Berlin.

So we are starting the lever right there. During the whole week we get busy getting the bikes, choosing the right ones and preparing them to be street-worthy until we have a great choice of bikes for You and only then we open for a direct sale of our stock.

This saves Your time and ours, too. The idea is to then put a fixed fair price on them and not bargain anymore about the price so that good bargainers are not preferred. 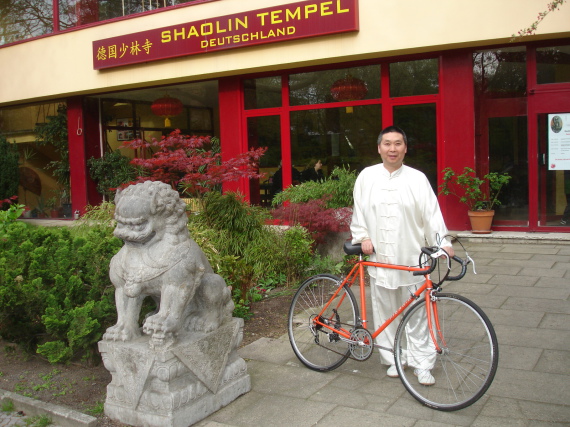 This Grandmaster is a monk from the Shaolin Tempel Deutschland in Berlin and is riding a donated bicycle from Gebrauchte Fahrräder Berlin.